Jannik Kohlbacher: I always want to achieve the maximum

You are here: Home1 / #Stories2 / #Faces3 / Jannik Kohlbacher: I always want to achieve the maximum

I always want to achieve the maximum

A chat with Jannik Kohlbacher about the “cursed” second training session of preparation, spending time on the farm and his anticipation of the new season.

How fit do you feel at the moment and what did it look like about four months ago?
Four months ago, motivation was at its lowest point after everything was set. There was no incentive to call up your performance to 100% or to go running voluntarily. It all started again only two, two and a half months ago when we knew that the league would start again. Currently I feel in top shape and I’m in great condition. Unfortunately, a few days ago I suffered a setback [Jannik suffered a ligament injury in the right elbow in the final of the BGV Handball Cup, editor’s note]. Up to this point I had no problems and the anticipation was huge.

You are known as a very robust type of player and you can take a lot. How has this robustness helped you to survive the difficult last few weeks?
In principle, the break was a welcome change for everyone. You had time to let your body regenerate. So I don’t think I actually had any problems, because my muscle loss – if it had been there – is limited during the rest phase. I think that others had to struggle a lot more.

“During the break I learned how important sport is to me and that there is more to it than running into the gym every day.” 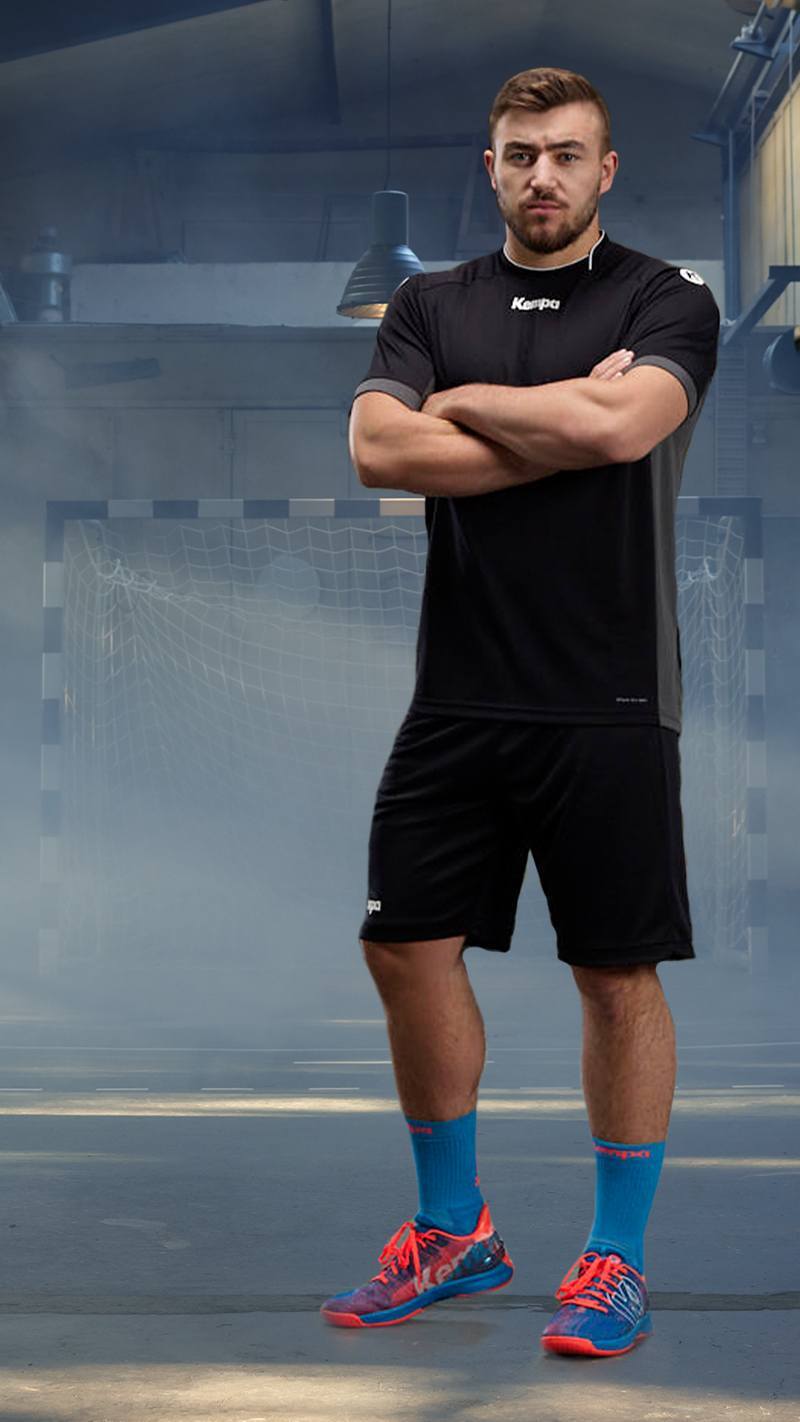 Jannik with his new ATTACK 2.0 〉

Which is more difficult to train, especially in such an extreme situation as COVID 19: body or mind?
Definitely the mind. It simply lacks that incentive when there is no competition for which you are training. If you train and it is unpredictable when and where everything will continue, then the mind is an absolute factor. Now we are close to the season. We’ve been working at full throttle for eight to ten weeks and then you’re right there with your head and you know what’s at stake.

As difficult as the last few weeks have been – what can you take away as positive for the future?
I think, apart from my injury, my body definitely got a lot of rest. During this phase you also learned how important sport is to you and that there is much, much more to it than just running to the gym every day and playing at the weekend. I think that I and everyone else became aware of that again during the break and it’s only now that you’re really starting to feel it. Because the thing we enjoy most in handball is playing in full arenas and in front of thousands of fans. And that is also what everyone in the sport longs for.

Many people became creative during the COVID 19 period, learned new languages or generally tried something new. What new things can you do now?
I kept myself fit mainly with sports. I also compensated for the time I missed with my family. I spent a lot of time on my parents’ farm and, of course, fishing by the water. So I always had something to kill time with. I was never interested in languages – apart from English and French – and I never had a special talent for them.

“From the second training session on, I thought: ‘Now it could be over again’.”

Now the Bundesliga is finally starting again. How can you put your anticipation and motivation into words?
We players and clubs are full of anticipation that we will finally be able to welcome spectators again – even though it will be a smaller amount of fans at the beginning. We already had an event with our fans during the preparations. For us, it’s always the opening of the season and there were already a lot of fans there – of course with a hygiene concept, distance, masks and everything that goes with it. But in these moments you can see exactly what you are doing this sport for. When you see the fans standing there and they cheer for us, that makes up for everything.

Despite all the anticipation of the new season – from which session on did you curse the preparation again?
(laughs) From the second training session on. The first one was still relatively relaxed. We did a few runs and played football. But from the second day on, when it really got going, I thought: “Now it could be over again”. But the hardest part is always the time before you meet the team, those four to six individual weeks where everyone has to run their plan. I’m lucky that my brother-in-law is also very keen on sports and with him I was able to go running a lot. That made it much easier for me.

“I want to be able to help the team again.”

You have done the preparation in the new ATTACK 2.0. What is your first experience report?
A great shoe, you have unlimited grip on every surface with the soles by MICHELIN. I always have the best grip in the gym. I think that if you’re not running around in the mud, it’s almost impossible to slip away with this shoe. The new SOFT FIT inner sock also makes it very comfortable to wear. You have direct contact with your shoe and the material adapts perfectly to your foot. And of course the stability is absolutely fantastic, that’s what the name stands for.

Have your personal goals for the new season changed due to the long break?
I always want to achieve the maximum. The team goals always have priority. You have to face up to them and then win as many points and titles as possible with the team – just like in the national team, of course. You always want to go to a competition and win this thing somehow. In the short term and on a personal level, of course, I want to be fit again as soon as possible so that I can help the team again. 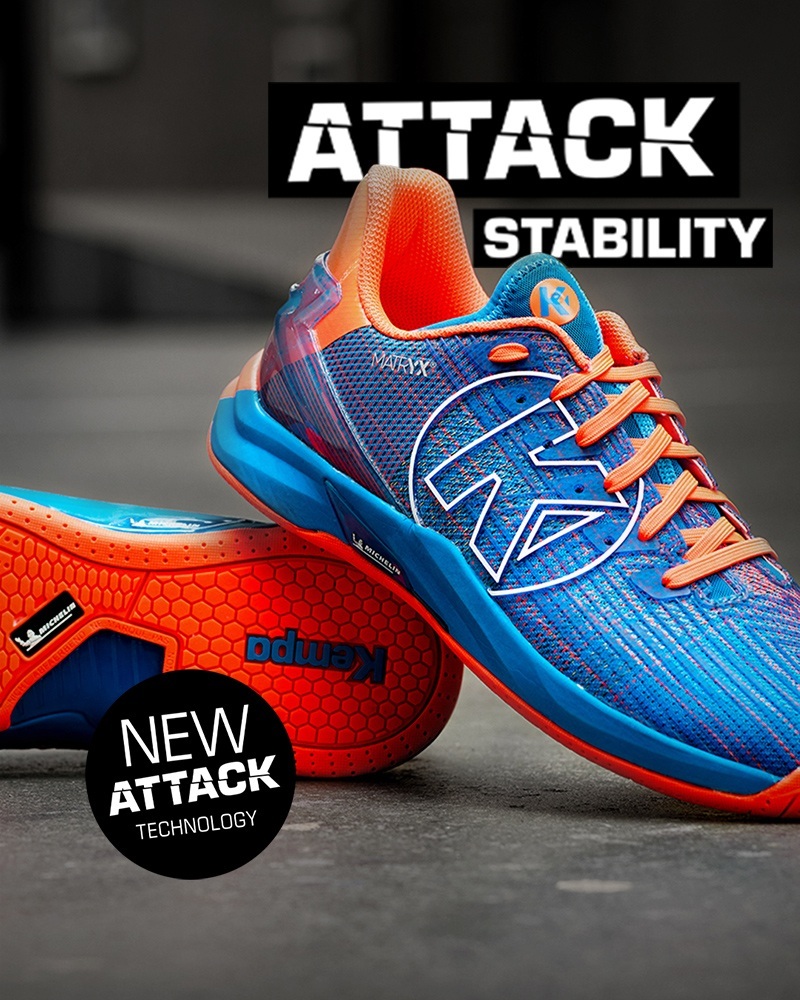 More about the ATTACK 2.0

Why the grip of his shoes is especially important for Jannik, how he contributes to the development of new models and what type of a car he is on the field, you can read on the Michelin blog soles.michelin.com.